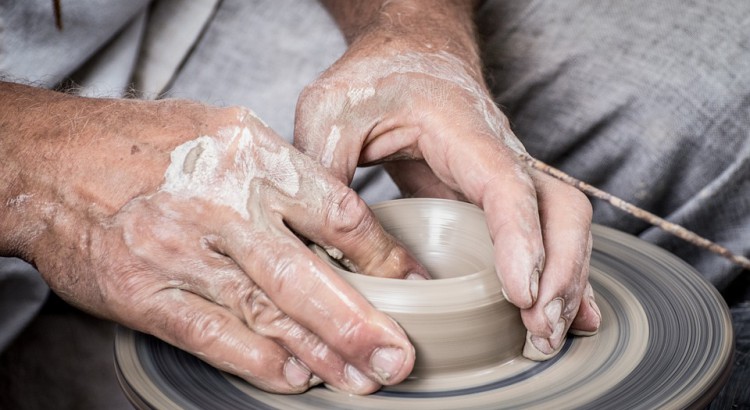 Gradually, one can begin noticing the nature of the mind. And only by looking at the mind from a small distance can one begin seeing it as independent from one’s own beingness – which is the eternal unchanging silent witness.

The mind becomes a ball of clay in front of ones vision, shaping itself by ones unseen and unexplainable volition. But what is volition other than the Divine Essence of ones Being witnessing itself witness itself. It comes back to awareness of awareness. And above that, one cannot even fathom.

By creating that space between awareness and mind, one begins to see the fundamental aspects of the creator within the mind. Only from a distance does one notice the goodness of the mind and its ability to command the lightship of consciousness. And yet it commands nothing. It is a result of some infinite mystery playing itself out in front of the one.

This space between the mind and awareness is also the degree of identification with each. It need not always be one way or the other. One identities, in varying degrees, with either the mind of its true nature of awareness-arising – also known as Beingness. For one is a being and nothing more, nothing less. However, the mind is full of distinctions, labels, and relationships. It is the computer processor that organizes the data of consciousness that is actually all One. If we did not identify at all with this little mind, we could not create relationship between ourselves and other “oneness.” There would be no lila, or Divine Play.

And deep within this space between Pure Awareness and mind lies the aspects of God the Creator or Source Energy or Prime Cause. Within this Infinite Creator, is the love for itself. It knows its goodness beyond all forms. And as one begins to examine the true nature of the space between itself, the knowing arises that it originates from a deep well of pure Love. That is fundamental and true to the core of ones beingness. And the mind that one uses can begin to purify itself in order to attune to this frequency.

The mind has the ability to reflect back to its own awareness the nature of awareness’ origin of Pure Love. And that is Christ Consciousness. That consciousness is a frequency to which the mind has access through deep inner self inquiry. When one realizes its mind is the attractor of all phenomenal experience, it can begin the process of purification in a very conscious manner. It sees the life events and circumstances that are arising as lessons to which it can re-direct its focus towards higher ideals or frequencies.

This is the mechanism of ascension or raising ones consciousness or raising ones vibration. They are all one in the same. This process is the evolution of the universe and of the Creator towards a more Self Realized state. One could say the Universe is always awakening to itself in deeper and deeper ways through the focused experiences the mind’s relationships and choices.

As one begins to see more good, more gratitude, more compassion, more understanding, more ease, more play, more fun, more excitement, and more love, then one is seeing the signs of a “more-pure” mind. This mind is the attractor and display mechanism to awareness of that which awareness is – which is Infinite. And the way that it feels in the present moment is how close to the furthest edge of expanding infinity one is resonating. A christ like consciousness is one who embodies the furthest reaches of the Infinite Source, but while still inhabiting a time-space physical body.

It is not about the actual experiences that arise, but the perspective to which you see them. All phenomenal experiences which arise around one have the ability to produce the full gamut of feeling-emotional response within them. Ones own belief system and perspective will be that which determines how one perceives events and circumstances. The more in alignment those beliefs are with the Infinite Expansion of All That Is, the better one will feel while encountering a given situation.

One who is identified strongly with awareness rather than mind will quickly see the mechanisms of the mind – beliefs and thoughts – which obstruct the alignment of perception with the Infinite Self. This means they become sensitive to lower frequencies through their emotions. One does not allow negative feeling thoughts or beliefs to persist within their consciousness, because they know that is not how the Infinite Self within them sees the situation. One who embodies awareness and being has a deep wisdom to understand the perfection and goodness that is innate in all events as they are the teachers and awakeners of every aspect of Source.

Help those who are suffering

When one sees others suffering, compassion arises, and wisdom as well. One who knows the pure goodness of their own Self knows that the other suffering one is revealing to themselves a deep lesson. And this one who is aware has the ability and choice to hold an energy and attention of their pure-love-realization and aim it towards the suffering one. The suffering one will benefit greatly and the aware one will benefit equally. Even though perhaps very little action has taken place in the physical world, there has been a tremendous shift in the vibratory realm and both parties are well aware of it.

Nonetheless, action in the physical world in order to help those who are suffering is a valid approach. One who is aware has access to Infinite Intelligence and knows the best action towards that support. One who is aware has a heart full of compassion and can help others without desire for merit, self righteousness, or even impatience. This is the true Love of Source manifesting in the world.

All suffering at the root is a simple ignorance of ones own goodness. A lack of self love is the only lack that exists, and this is not even true lack, but an illusion. Once one sees deeper, through the purity of their high vibrational mind, one will gradually begin noticing that self love is the same as Source Loving them.

A simple practice for you

One can begin to realize all of what is outlined here through their own self inquiry. One may calm the mind through repeated questions or koans as they are called. These short phrases activate a shift of awareness from the mind to awareness of awareness. When one becomes aware of the silent witness – which is the source of their Beingness, then automatically their identification has shifted slightly away from their thought-mind self. This is the “little self.” And within this space is the very truth of all.

One may repeat phrases below. Feel free to mix and match them, pick just one, or many.

(This post was written shortly after an intense meditation where I realized my own goodness and purity. I saw that my genuine intention to help others was a manifestation of the Love of God for itself.)